In 2015, PBS released a documentary called Being Mortal. It brought to light many of the inadequacies of our medical system in regards to end-of-life care. In particular, the film delved into the medical community’s tendency to push for curative care too long, and to ignore or neglect to have important end-of-life conversations with families. Based on a 2014 book of the same name, the documentary follows Dr. Atul Gawande’s quest to understand the underlying causes for the medical system’s shortfalls in end-of-life care. Since its first airing, the film has gained popularity among end-of-life care professionals. As part of community outreach and education programs, hospitals and hospices across the country are hosting free screenings of the film.

Screening and discussions of Being Mortal

Hospitals and hospices across the nation plan to host free viewings of Being Mortal this summer as part of their community education and outreach programs. From Ardmore, Oklahoma to Chicago, Illinois, organizers hope to help illuminate certain issues in end-of-life care so that patients and their families understand their options in care and can make better decisions for themselves. These screenings will include guided discussions after the film on how to take concrete steps to identify and communicate wishes about end-of-life goals and preferences. 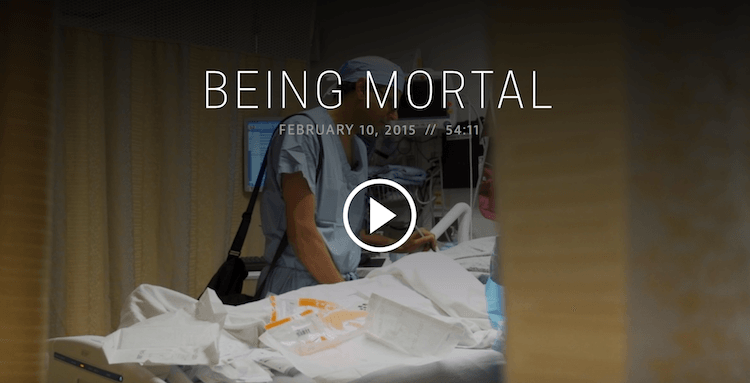 Being Mortal: How False Hope is Hurting Patients.

The film Being Mortal follows Dr. Atul Gawande, a surgeon and writer, whose own father was diagnosed with cancer. Gawande wrestles with the difficult questions that come with such a diagnosis, including questions about end-of-life care. His personal story is used as a segue into exploring broader issues about end-of-life care in the medical community. In the film, he specifically focuses on what he calls, “the two big unfixables” – aging and death.

Being Mortal takes viewers behind the scenes to witness the difficult end-of-life conversations doctors and patients must have. We see first hand the delicate balancing act between curative care, which is largely toxic and can shorten life, and palliative care, which focuses on quality of life until the end. It is the tendency of the medical community to focus on curative treatments far too long, to the detriment of terminally ill patients.

This trend is fueled by the human tendency to have false hope. Physicians especially want to preserve hope in their patients. This encourages those with life-limiting illnesses to consider curative treatments, even if they’re completely inappropriate. This trend was particularly well exemplified in the film when Gawande sat down with his father’s oncologist. Despite the severity of his father’s illness, the oncologist proposed a variety of treatments with the hopeful statement, “You could be playing tennis by the end of the summer.” Gawande knew this was extremely wishful thinking.

Medical Schools Are Stepping Up to the Challenge.

We live in a death denying culture. Even the medical community is reticent to tackle end-of-life issues. The solution will invariably start at the root of the problem. Being mortal brings to light how unprepared and untrained the medical community generally is in regards to terminal illnesses. Therefore, the solution begins where physicians get their start: medical school. Since the film’s release, medical schools across the nation have begun adding end-of-life care education and preparation programs to their curriculum to improve physician preparedness and outcomes for patients.

What is Death Anxiety, and How Does It Affect Hospice Patients?

Fear of death is ubiquitous. As far as we know, we are the only species…

As we age, we face a full breadth of health problems that can lead to…