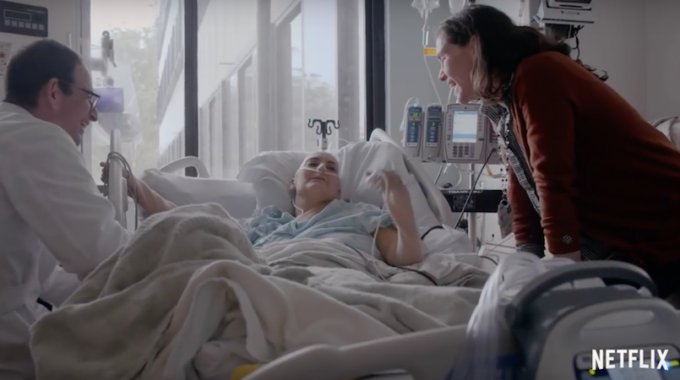 A new documentary on Netflix, called End Game, seeks to bring light to issues in end-of-life care. The film follows a palliative team from UCSF Medical Center in San Francisco who review, discuss, and explain the options available to patients with terminal illness. Their most significant challenge is to overcome the stigma of hospice enrollment held by their patients who, along with their families, are not quite ready to give up on life.

“Hospice has a label of, ‘that’s it, kiss it goodbye,’” said Kim, a terminal cancer patient with weeks left to live who received a visit from the palliative team. Her husband sat at her side at a loss for words and tears in his eyes, and she reached for his hand to comfort him.

“The goal is to help you live as well as possible, for as long as possible,” the lead physician explained.

The U.S. and Canada face an uphill battle in regards to hospice enrollment. While research has shown hospice improves patient satisfaction in care at the end of life, most patients and their physicians wait until the last possible minute to enroll despite an earlier terminal diagnosis. These patients undergo invasive life-extending treatments that cause pain and diminish the quality of life, even though they do extend life.

End Game gives audiences a glimpse into the decision-making process to enroll in hospice and how that decision tends to be fraught with fear and emotion. Mitra, a terminally ill mother of an eight-year-old son, stopped responding to treatment. Her doctors agreed she did not have long to live. Mitra’s husband and mother wrestled with the decision to cease treatment and enter hospice. Mitra had lost the ability to think clearly and make the decision for herself.

“Still if there is a chance to fight, I think we should fight,” said Mitra’s husband when the doctors explained his wife’s condition to him. He still had hope that she might pull through.

“There is no hope,” her mother countered. “I don’t want to see her like that; she’s suffering.”

While it is easy to look at the research and say that patients should enroll in hospice care sooner, the film does a fantastic job of showing the human nuance behind the decision to cease life-extending treatments. For all its benefits, hospice remains a frightening prospect for the dying and their families. Physicians, social workers, and the other members of the palliative team navigate a delicate emotional landscape.

End Game follows patients from UCSF Medical Center to a hospice facility called the Zen Hospice Project, founded and managed by Dr. B.J. Miller. Miller has made it his life mission to help hospice patients through their final life transition, as well as help families cope with the pain of loss. He seeks to give families closure and to find the beauty in grief.

Miller began his work in end-of-life care after an accident in his early twenties robbed him of both his legs and an arm. “I had to learn to cope with being disabled early on,” he said. It was a harrowing experience that led him to dedicate his life to helping others through traumatic life events. He discovered hospice and palliative care in medical school and decided those disciplines would be where he could make the most positive impact. His mission at the Zen Hospice Project is to help patients and their families cope with the prospect of death, to accept its inevitability, and to help families move forward after a loss.

End Game reveals to audiences the compelling benefits of hospice through Miller’s Zen Hospice Project, and endeavors to dispel the stigma that deters many patients from enrolling earlier. It also counterpoints this effort with the arduous process the palliative team at UCSF Medical Center faces in educating patients about their best options. Particularly in the case of Mitra, it is patients and their families who often present the most significant obstacle to hospice enrollment, despite the benefits. Most poignantly, the film underscores the fact that communication from physicians is key to hospice enrollment.

“Doing this work and being near people who are at the very, very end…everything I have ever seen would suggest, wherever we are going, I don’t know that it’s so bad,” said Miller.

End Game is a fantastic, poignant, emotional film that is an excellent resource for physicians, patients, families, researchers, and anyone else interested in end-of-life care issues. It is a must-watch for everyone in the hospice industry.

4 Wellness Activities That Can Help You Handle Grief

The loss of a loved one will never be easy, nor will grief for their…

6 Myths About Grieving to Rebuff

Grieving is a natural process that is inherent in humans. In some ways, grieving is…