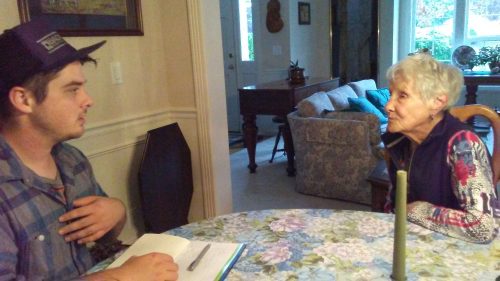 Today’s world is a busy one. We strive to run faster, work harder, and in the process, we often forget to slow down to appreciate certain joys in life. 1-800-HOSPICE correspondent, Caleb Schniepp, did just that when he sat down with Mary Ashby, a 103-year-old from Oregon, to discuss her use of Facebook. What he learned was a whole lot more remarkable than what he had bargained for:

On a rainy afternoon, Schniepp visited her in Lake Oswego, Oregon where she lives with her son and his wife. She sat at her dining room table and recounted some of her favorite life memories. Her recollection is astoundingly sharp.

Born in 1913, infant Mary moved with her family from Arkansas to Oregon. Her father worked hard to support their growing family in a rural part of the state. When the Depression hit, her father, who had then gone into business in Los Angeles, lost everything. Mary decided with her sisters to move back with their mother to Salem, Oregon in 1932. She was married shortly after that to a college basketball coach. Despite the dragging economy, they were able to buy a home and remained in Salem until 1955. Mary and her husband Bob had two children.

As a testament to her excellent memory, Mary related how as a child, 100 years ago, she went out one frosty morning and licked the frost on the metal gate enclosing her front yard. Conjuring images of the classic movie, A Christmas Story, Mary was stuck to the gate until her mother freed her tongue with a pan of hot water.

Mary also remembered how, at the age of about 2, she crawled through a hole in the farmstead fence to the horse pasture. She latched onto a horse’s tail like a leash. Her mother, unable to follow, desperately tried to get Mary to come back out of harm’s way. Mary recalled her mother yelling, “I’ve made a pot of chocolate pudding, do you want to come and get some?”

Mary went on to explain that raising children in her generation had few differences from today. Besides being “a little foxier,” people today have a lot of the same aspirations, defeats, shortcomings, and victories, she explained. “There are nice groups, funny groups, some get into trouble, and some don’t,” she stated. “What meant to us kids then means the same to kids now. The way you are raised today is very much the same as it was then.”

Living through the Great Depression.

Continuing her story, she went on to tell her thoughts on the Great Depression.

“The depression was tough,” she said. “But we got by a lot better than other people.”

Her husband worked in a bakery and was able to earn a steady paycheck. They borrowed money from his father to buy a house. They put $800 down for a $1700 home, including furniture. “There were all these people without jobs, much worse than what we see today. People came to our door begging for food.”

“No one gets that desperate now,” she said.

When asked about her thoughts on the buildup to World War II she said, “We were scared to death!”

“I couldn’t stand the thought of an airplane flying overhead, and I didn’t know if my husband would be hauled off to war or not.”

He had seven deferments by the time the war was over. Each time his birthday came up, the military deferred him for one reason or another. Bob Ashby finally made up his mind that he would just “join and go.”

“But…I wouldn’t let him,” Mary said with a smile. “I don’t know if anyone had to go through something like that, it was a harder time for most people than today. We had it easy I figure, more than most during the war.”

Mary is one of the oldest users of Facebook.

Fast forward to today, Mary has five grandchildren, eight great-grandchildren, and one great-great-grandchild on the way. Most of them live too far away to visit regularly. At 103, she is one of the oldest living people to use Facebook. “[Facebook] is for my great-grandkids!” she said laughing. “They were all [using Facebook], and that way I could keep in touch with them because I knew we wouldn’t write letters.”

Mary enjoys keeping tabs on family and friends, and she loves looking at their pictures. “It’s been a lot of entertainment for me.” Her family is essential to her; her room is decorated with photographs of the family from yesteryear, and the collection continues to grow. It is like a small museum of where her family has been and where it is going.

What Mary does on Facebook, however, is eclipsed by what she does in real life.

For Mary, age is of no consequence.

She recently gained some local notoriety when, to celebrate her 103rd birthday, she did what most people half her age have never done: skydiving. The indoor skydiving company near her house had an age limit of 103, so before her special day, she donned a jumpsuit and dared to do the extraordinary. “I couldn’t see anything wrong with it,” she said.

Her adventure landed her a news story in the Portland Tribune. “It wasn’t scary,” she said. But she admitted, “I wouldn’t do it again, I don’t think.” If Mary was implying she was too old, she indeed didn’t seem like it. Mary is an incredible woman. She has lived through some of our nation’s most trying times: the Great Depression, the second World War, and everything that followed in the Cold War. Not only did she overcome, but she saw to raising her family well and remains their much-loved matriarch to this day. Most impressively, she does not allow age to deter her from making the most of life. And she doesn’t let age dissuade her from anything, whether it be using new tech like Facebook, or taking a stroll at 10,000 feet.

Jim Henry: A Story of the Perseverance of the Human Spirit Through Time.

Some say that learning is a lifelong journey. This phrase certainly applies to Jim Henry…