A recent 2016 survey on end-of-life issues by the Kaiser Family Foundation found that 7 in 10 Americans have heard of hospice. Among those, 9 in 10 have a favorable opinion of it. The survey shows how far hospice has come since its early days. Classically, knowledge of hospice and palliative care services remained an oft misunderstood medical field. There once was a stigma around it. Evidently, this is no longer the case.

The Kaiser Family Foundation conducted a comprehensive survey about end-of-life issues in four countries: the U.S., Italy, Japan, and Brazil. They had as their goal to shed light on the state of end-of-life care in each country as compared with the expectations of those countries’ citizens. In the U.S., the survey sampled a little over one thousand participants through random sampling, 739 of which were contacted on cell phones, and 268 of which were contact via landline. The survey was conducted from March 30, 2016 through May 29, 2016 in the U.S.

According to the census bureau, in 2014 Americans ages 65 and over totaled no more than fifteen percent of the overall population. As the baby boomers retire, this figure is expected to jump drastically. In fact, some projections estimate that the 65 and older population will reach nearly one quarter of the overall population by 2060. As Americans age, so too will the issue of end-of-life care become all the more important to understand. 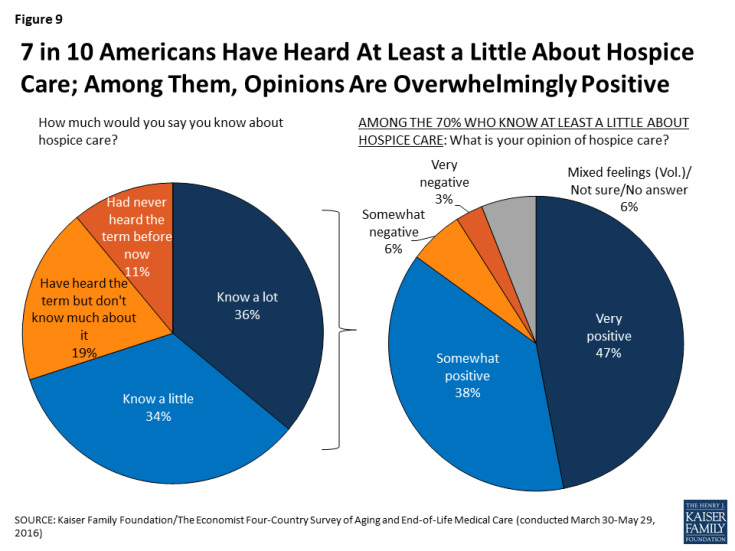 While the Kaiser Family Foundation survey focused on a wide breadth of issues facing our aging population, it made key findings in end-of-life care that are somewhat surprising. Hospice is a discipline that has long lived in the shadows and has lived with the burden of misunderstandings about their purpose for decades. However, the survey found that opinions about hospice are overwhelmingly favorable, with fewer than one in ten respondents expressing dissatisfaction with the discipline. This revelation is a testament to the valiant efforts of hospice professionals to effectively communicate with the general public about the benefits of hospice and palliative care.

Living as long as possible not a top priority

The Kaiser Family Foundation survey asked respondents to rate the importance of certain factors in end-of-life decisions on a scale of extremely important to not too important. What they found was that the top priority for Americans in regards to end-of-life decisions is to not be a burden to their families. This was followed in importance by making sure their medical wishes are followed, having loved ones around them, and being at peace spiritually. At the bottom of the list was living as long as possible.

As we have reported before, Black and Hispanic Americans were far more likely to report prolonging life as a top priority in end-of-life decisions. This is consistent with numerous other studies that have reported similar findings in the past.

7 in 10 Americans prefer to die at home

A key finding in the Kaiser Family Foundation survey was the idea that most Americans prefer to die in their own home. Indeed, the demand for in-home hospice has grown tremendously in the past decade, and attitudes toward dying at home are also quickly changing. 7 in 10 Americans surveyed reported a desire to die at home. This stood in contrast to an additional finding, that showed only 4 in 10 Americans actually expect to be able to die at home.

Key takeaways from the findings

The Kaiser Family Foundation survey’s findings demonstrate a marked improvement in how Americans view end-of-life services such as hospice and palliative care. Although the survey showed disparities between Americans’ expectations and the reality of the care services, the overall trend is positive. Americans now overwhelmingly view hospice as a good. They place less emphasis on needless life-prolonging treatments and want to die at home rather than in a hospital. These trends will undoubtedly lead to better decision in end-of-life care with better satisfaction in care. There is still a lot of work to do to improve outcomes in end-of-life care, but we can be proud to say that ample progress has been made to date.

What Are the Top 10 Causes of Death in the US Each Year?