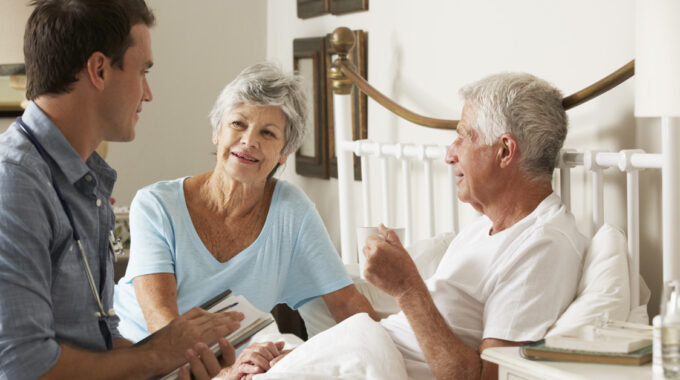 Why Healthcare Leaders Care About Dying at Home

Most Americans state a preference to die at home.2 During end-of-life care, honoring a patient’s wishes is widely considered a key component of quality care.3 Additionally, there is a growing consensus that place of death itself is a quality of care indicator, with dying at home being reflective of higher quality care. Moreover, a study published in January’s Journal of the American Geriatrics Society shows that dying at home is associated with higher satisfaction with care.4

Natalie Regier and colleagues from Johns Hopkins University studied the association between place of death and satisfaction with care. They used in-person interviews with 1,500 family caregivers of people who had died. All the decedents were Medicare beneficiaries age 65+. The loved ones reported significantly higher satisfaction with quality of care when the death was at home. This proved especially true when the person who died had a cognitive impairment such as dementia.

Given that most people prefer deaths to be at home, the current study agrees with earlier research published in the Journal of Palliative Medicine.5In that study, Nita Khandelwal, MD and team found that when loved ones described any portion of end-of-life care as not being concordant with patient wishes, the loved ones proved three to five times more likely to rate the care as fair or poor.

How to Have End-of-Life Care Concordant with Patient Wishes

To some extent, being able to die at home has a lot to do with the cause of death. Causes of death with long, predictable courses (such as cancer) are associated with a higher likelihood of dying at home. On the other hand, respiratory disease ranks as the cause of death most associated with dying in a hospital.1 This is due to the unpredictable nature of respiratory disease exacerbations.

That being said, many predictable deaths occur in institutions. The single characteristic of health care most associated with having end-of-life care consistent with the patient’s wishes is having a death at home. This is probably a reflection of the fact that when doctors take the time to ask patients their wishes, home is much more likely to be the site of end-of-life care.6 The single variable most strongly associated with having a death at home is having hospice services.4

If you were diagnosed with a terminal disease, would you want the doctor to tell…

Can Doctors Accurately Predict How Long Someone Has to Live?

When patients have a terminal disease, candid but compassionate conversations about life expectancy prove vitally…

Is It Appropriate for Doctors to Use the Surprise Question on Terminally Ill Patients?