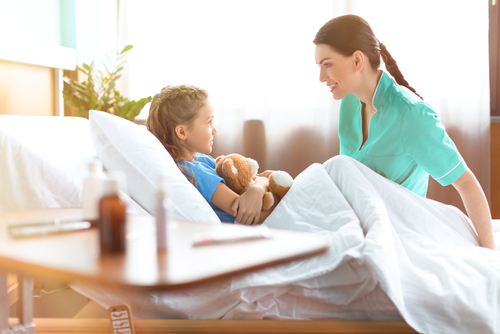 Four year old Julianna was born with a severe form of a rare neuromuscular disease called CMT. Her treatments failed to stop the progression of the disease, despite her physicians’ every effort. Faced with increasingly difficult and dangerous options, her parents elected to enroll their daughter in hospice. Said Julianna’s mother, Michelle Moon, in a recent article penned for CNN, “To get to the point of contemplating hospice for your child, a parent has to say ‘enough.’ Such a moment defies the most basic parental instinct that your child must live at any cost.” In such a scenario, one might think children’s hospices would be first in line to help.

Her story is a heartbreaking one, and one that expounds the virtues of hospice. Moon speaks to hospice’s focus on life and on making patients comfortable at the end of life. Conspicuously absent, however, is any mention of whether or not they received care from a dedicated children’s hospice. The care Julianna received was likely given by an adult hospice in her home. How hospices treat and handle dying children is a complex issue that has, for at least the past ten years, been a focus for improvement in the healthcare industry. Great strides have been made, especially in regards to the availability of home hospice and training programs to prepare physicians and their staff for pediatric patients.

Why are there only four children’s hospices in the country?

A recently opened children’s hospice in Minnesota was only the fourth of its kind in the country. Jill Wall, a registered nurse who has worked in a hospice setting most of her career, explained to local CBS station WCCO that this facility was long overdue. “There are 900 children who die each year in Minnesota who have no other place to go. Either it’s going to be the hospital, or their home, or an adult hospice and that’s not equipped for children,” she said.

Why there are so few dedicated children’s hospitals is a multifaceted issue that stems from difficulties financing such projects as well as improvements made by adult hospices and hospital programs to accommodate children. Jon Radulovic, Vice President of Communications for the National Hospice and Palliative Care Organization, reached out to 1-800-HOSPICE™ for commentary on the subject. He explained, “Much of the care for dying children comes from other providers and organizations. Common settings for pediatric palliative/hospice care in the U.S. are hospital-based programs, hospices with pediatric services, and some long-term care facility-based programs. So many children are receiving care in different settings. A priority in many cases is to work to keep children at home or in their communities, so that can make the sustainability of free-standing pediatric hospices challenging.”

Despite Progress, The U.S. needs to bring more attention to children’s hospices.

“For any parent, being told that your child may have a life limiting condition or may die young will be one of the most difficult and isolating experiences you can face,” Kate Middleton said in a recent PSA, filmed at East Anglia Children’s Hospice in Quidenham, Norfolk. “Having someone to help you come to terms with this news, and the professional care and support that comes with this, can make an enormous difference. It can help families make the most of every precious moment they have together.”

The U.S. has not been so lucky as to have royalty advocate for children’s hospices. The issue remains largely outside of the public dialogue. That needs to change. Stories like Joanna’s are a fantastic way to raise awareness, but it will take far more to drive greater awareness and funds to create better access to specialized hospice services for children and their families, particularly if they have nowhere else to go other than the hospital at the end of life.

There are major national organizations currently working to further improve pediatric hospice services as well as awareness for the subject nationwide. Jon Radulovic notes that, “In 2007, NHPCO conducted a survey on pediatric services among our member provider organizations. Overall, 78% of responding hospices reported that they serve pediatric patients, and 36.6% reported having a formal pediatric program in place. So we are seeing hospices put efforts into training their staff to meet pediatric needs as well as developing more comprehensive programs.”

“There are strides being taken that are helping improve care and services available to dying children and families in the U.S. There are resources being developed to help the hospice and palliative care community develop the necessary skills to care for pediatric patients and families. NHPCO created Standards of Practice for Pediatric Care and Hospice that augment our Standards of Practice for Hospice Care (first published in 2006).  NHPCO created a pediatric concurrent care implementation toolkit following the passage of the ACA.  We have a workgroup of pediatric professionals that are part of our ChiPPS program (which stands for Children’s Program for Palliative/Hospice Services) which continues to develop resources and offer training at many of our conferences in recent years.  Additionally, the American Academy of Pediatrics released a policy statement in 2013 outlining core commitments of pediatric palliative care and hospice care,” said Radulovic.

*Special thanks to Jon Radulovic of the NHPCO for reaching out to us with commentary.

Why Are Physicians Less Likely to Refer Blood Cancer Patients to Hospice?

Increasingly, hospice is considered an indicator of quality end-of-life care. It is also breaking the…

How to Use Writing to Cope with the Stress of Caregiving

Writing has long been known for its therapeutic qualities. Although the actual method of writing…